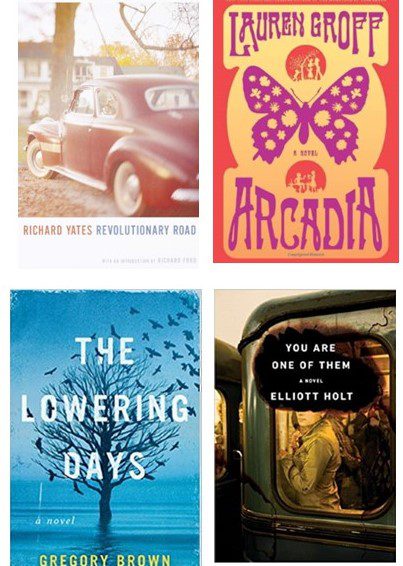 All discussions are on the fourth Thursday of the month, 3:00-4:00 pm. Participants may attend in-person (masks required) or via Zoom. Please visit the library’s website (https://norwaymemoriallibrary.org) for each month’s zoom link to attend remotely.

In the hopeful 1950s, Frank and April Wheeler appear to be a model American couple: bright, beautiful, talented, with two young children and a starter home in the suburbs. Perhaps they married too young and started a family too early. Maybe Frank’s job is dull. And April never saw herself as a housewife. Yet they have always lived on the assumption that greatness is only just around the corner. But now that certainty is now about to crumble.

In the fields and forests of western New York State in the 1960s and 1970s, several dozen idealists set out to live off the land, founding what becomes a famous commune centered on the grounds of a decaying mansion called Arcadia House. Arcadia follows this lyrical, rollicking, tragic, and exquisite utopian dream from its hopeful start through its heyday and beyond.

May 26: The Lowering Days by Gregory Brown

Growing up in a riverside region of 1980s Maine, three brothers from the Penobscot Nation find their childhood innocence shattered by a nearby paper mill fire that divides their community.

June 23: You Are One of Them by Elliott Holt

Sarah Zuckerman and Jennifer Jones are best friends in an upscale part of Washington, D.C., in the politically charged 1980s. With Cold War rhetoric reaching a fever pitch in 1982, the ten-year-old girls write letters to Soviet premier Yuri Andropov asking for peace.  But only Jenny’s letter receives a response, and Sarah is left behind when her friend accepts the Kremlin’s invitation to visit the USSR and becomes an international media sensation.  The girls’ icy relationship still hasn’t thawed when Jenny and her parents die tragically in a plane crash in 1985. Ten years later, Sarah is about to graduate from college when she receives a mysterious letter from Moscow suggesting that Jenny’s death might have been a hoax.  She sets off to the former Soviet Union in search of the truth, but the more she delves into her personal Cold War history, the harder it is to separate facts from propaganda.