The men who worked on square-riggers in the 19th century used rhythmic work songs, which they called chanteys (or shanties, depending on where they were from), to coordinate their muscle power as they raised sails, moved cargo, and heaved up the anchor. These songs have found a resurgence of popularity on social media and recent movies. They are loved for their compelling rhythms, singable choruses, and the salty flavor they deliver, conjuring images of wooden ships bowling along under a cloud of canvas.

Bryant is a singer and independent folk scholar who has deeply studied traditional sailor songs, including chanteys. He has appeared at maritime festivals across the US, singing the old songs and keeping the art of the chantey alive. He accompanies his singing with concertina and banjo, but delights in belting out a capstan chantey unaccompanied, the way it was done on the deck of a barque or brigantine 200 years ago. His research allows him to add historical insights to his performances, so the audience comes away from one of his programs with an understanding of the cultural context in which these songs were originally sung.

Bryant has a YouTube channel called Chantey Talk, in which he explains the ship-board tools and terminology sailors used in traditional chanteys. He has appeared on numerous recordings and soundtracks. With family roots in South Paris and Buckfield, he is excited to bring this music to the area.

This summer concert is free to attend and open to the public. Doors open at 6:30 pm so please arrive early as seating is limited. For more information please call the library at 743-5309 or visit norlib@norwaymemoriallibrary.org 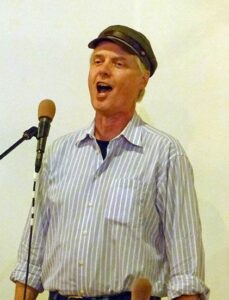